I've now had my last immunotherapy infusion of the calendar year. Useless and meaningless trivia, but that’s just fine with me for now, because I’ve had enough profound, life-altering, on-your-mark-get-ready-set essential bulletins in the last few months to last me another lifetime, which it may well have to do. 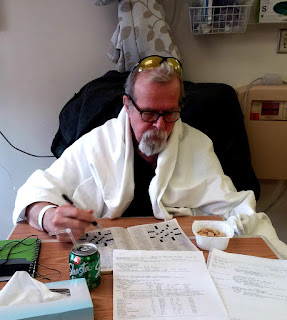 (That’s an inside cancer joke.)

Today’s treatment was uneventful: the nurses know me and my rolling veins well enough now to never miss the puncture, and they always give me the right chair. I must have my back against the wall if I’m going to be sitting in public for a while. It’s the Wild Bill Hickock Syndrome.

Maybe that will change in this new year, as I’m more concerned with the killer in front of me than the one coming up on me from behind. Plus, I'm playing crossword solitaire, not poker.

(Another cancer joke, truly awful, but my license).

And, just incidentally, in my nursing career I’ve always given my patients the needle on “two” during a called three-count. “Ready? Okay, on three, ready? Now … One … TWO!” This way, the patient is in pre-flinch mode. Less tension, less pain, less chance of missing the mark. (You won’t find that method in any of the manuals.) 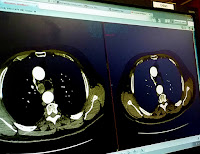 My oncology Doc checked in as usual during treatment, reviewing the latest labs, checking vitals, doing Doc stuff. At my request, he also brought up my new mystery lymph node image (see Day 052) on the computer to show Diane, who came along today to help hold up my fuzzy-saggy head. I again asked the Doc, as I always do, all the doomsday and V-Day hypotheticals.

Diane asked him, in her best fellow research biologist-speak, “When you do the biopsy, will the analysis be similar to the staging that was done on the subclavicular scan?” 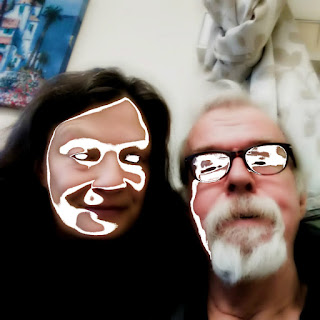 She is my pearl. My sheet music. My lava flow. My sticky note. I love her. The Doc said great question, and gave her an answer that blew by me like a comet brushes by the earth, as my eyes shut down my ears. I’m okay with just watching the burst and receding flash of light and letting it go.

Much as I want to know everything about everything, I don’t have to.

Yes, yes, I know the Doc would rather not talk about what would happen if this happened when that happened, should the other thing happen while the first thing is happening … but that’s because he’s a good doctor.

Still, he also knows my mindset, and allows my always wanting to know the “best- and worst-cases,” obliging me the best he can. Yes, he’s concerned about the image, which is why he and his fellow consulting Docs want to get the biopsy next week, so we can rule in or out the goods and evils based on hard evidence.

Meanwhile, not knowing where things stand plays absolute hell with my imagination, but isn’t that common in all of us? Don’t we all let our minds run wild when it comes to those certain uncertain biggies in our lives? 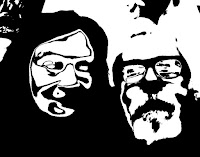 Yes, we can and do conjure up most anything when we labor over what might be coming next in love, sex, death and where the fuck are the car keys.