It’s now tomorrow and I’m very late posting, but I’m doing this so you’ll have your dose of entertainment from my adventures in pre-closure.


As usual, there I go misdirecting and evasive, and because I’ve never been a good liar, here it is: 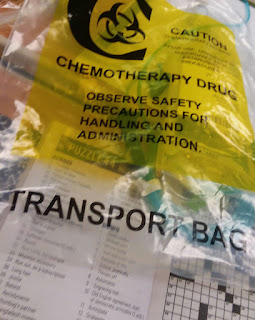 I’m up in the wee hours for … yes … a case of the literal capricious wees. Nothing to do with cancer; this is strictly an old man’s nighttime comeuppance (though comedownance would be more accurate). A little later-in-life jest from whatever head honcho runs the Cosmos, or whatever you think does.

Yes, it’s a lovely pissing reminiscing regimen, but it’s also an insomnia driven by 35 years of night-nursing shifts and whothehell knows what. 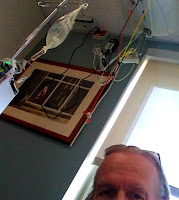 And, yes, yes, I’ve had all the counseling, including the Freudian lookalike whose office even sported a Victorian psychiatrist’s couch. He wanted everything to be about my paternal murder or maternal seduction. He’s dead now, and I hope he died wearing a Depends.

We’ve talked about this before, but a heightened awareness of a possible cancerous pre-mortality permanently changes the way one sees the world. It’s very much like skydiving. I’ve made over 300 jumps, and once you’ve been up there in the clouds falling at terminal (an unfortunate adjective) velocity with nothing between you and eternity but a parachute, you never look up at the sky the same way again.

It’s the same with cancer, and I suppose a host of other interceptions that have the net effect of introducing the nearer and thereafter life waiting up ahead for all of us.

It changes everything. Forever.

Once again, it's my new course of how the world now comes at me and how I plunge word-long into it. It’s finding deep meaning in the shallow, and simplicity in everyone else’s complications. My new role as a cancer patient. My long-pursued goal as a humorist.

So, a few more signs, deep and/or simple on this day with a fiery chest radia-rash, sore throat, and shifting internals that have upset the hell out of my ins and outs. I'm coping well via my breakthrough meds, but my new traveling companions are backseat brats, and it’s a long way to the next off-ramp. 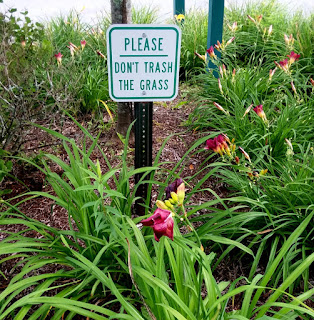 In a world of increasingly lazier, meaner and dumber-downing language, I love this sign: It used to be a firm but polite request: “Please keep off the grass.” Today, don’t trash it, pal. With no respect and giving all the discredit to our braggadocian-in-chief, I can trash the tallest, greenest grass better than any green grass-trasher in the history of the world. That I can tell you. 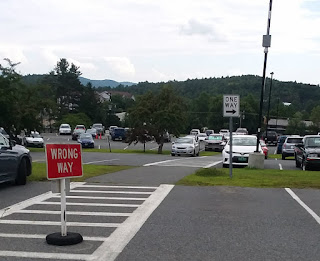 Or, this one. The longer I look at this, the more I see it as the complete meaning of life. Right in front of me in the parking lot (check both signs. Isn't one or the other enough?). If we have respect for how we move and stop on this big marble, this explains everything.

And, this. Maybe it’s the mask I see, and the intervention sitting patiently behind it. To pull, or not to pull? That is the suggestion. 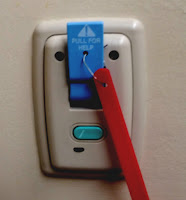