And then there was … Korea.

No … wait! … wrong reality! Today, the unmasking, if you consider a head of hair a disguise, which I do, now that I’ve seen me without it.

It was reverse déjà vu all over again after the deep buzzcut, because I haven’t looked at this frozen mug or felt this fuzz since Parris Island boot camp. The only difference this time is the cancer, and no footlocker pushups. Otherwise the pain was/is about the same. Hoorah. Semper Fi. 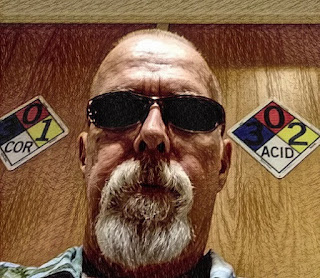 High praise and thanks to the lovely Split Ends Salon stylist at the Dartmouth Hitchcock Medical Center. I told her going in that she could relax through at least one clipping today, because unless she used a flamethrower, it would be hard to do it wrong. She then took me in without an appointment, did a stellar job, then didn’t charge me! I insisted, however, on tipping her. She did have to suffer through my bad head puns, after all. 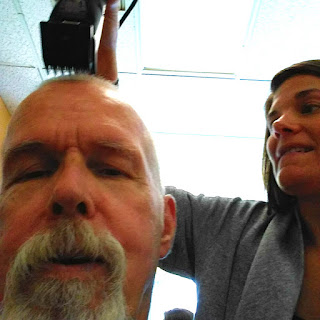 If anyone would care to offer a verdict, a commentary, an insult, a dirty joke, or any other evaluation of my freshly clipped dome, please do. Diane’s comment: “I like it!” Part of that might be that she’ll no longer find my hair in the supper stir-fry, but I do believe her. 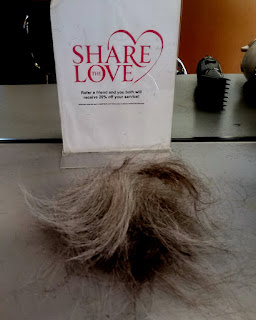 Isn’t there an historical superstition about head-rubbing that is applicable here? Ah! My crackerjack columnist research shows that the jury’s split on this one. I’m going with the host of photos I found of George W. Bush publicly polishing the pates of total strangers. He was very nearly obsessive about it. Hmm … okay … good enough for Dubya, good enough for rubya! (See what I did there?)

So, before the day was out, I did press a few nurses to give me their opinions on my new headtopper cropper. The most popular answer: “It makes you look so much younger!”

Uh-huh. Bless them for the redirection, but I’ve been a nurse for a long time, and nurses will say things like that after you’ve had a successful heart surgery or bowel movement. We’ll call it praising with a faint damnation. Still, it helped to recharge my day and give me a break beyond these nagging short circuits everywhere else in and on this body.

Oh, and one last woohoo! I’ve just discovered that the cueballs among us have an annual Bald Is Beautiful! convention in Morehead City, North Carolina. There are even contests and awards for categories like “Sexiest Bald Head.”

Here comes Diane: “You’re a shoe-in for that one.”

Okay, now I’ve gone to the head of our class. Meet you there.