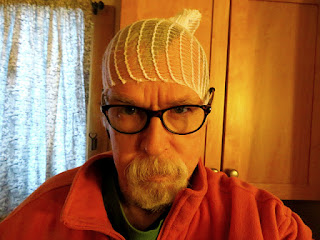 I really didn’t mean to begin this with a pic of me wearing a conforming tubular stretch dressing on my head, but part of my job is to get you to laugh at my expense.

The “Spandage” is meant to be applied on an upper or lower extremity to make dressing changes easier and more comfortable for the patient. I maintain, for the sake of a cheap laugh, that my head is also an extremity, and today I had a comfy head deficit. 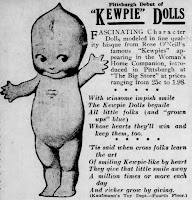 Diane laughed and my nurses became even more convinced that I'm a little weird (mission accomplished). She told me that I looked “like a life-sized adult Kewpie Doll, with loosely on the adult." No debate.

Back to the infusion suite today. Isn’t that a lovely moniker? Sounds like hospitals could and should also have Pediatric Penthouses and in my case, Chemo Crashpads).

Today’s news: My recent lower region CT scan showed nothing, and with apologies and homage to a favorite film’s fictional Lucas Jackson: "sometimes nothing is a real Cool Hand." (If you’re a movie buff, you’ll know.) So …

The good news: my original lung tumor is “a bit better” and there’s no other apparent spread to my southern body biospheres.

The bad news: there’s a “slight increase in my mediastinal lymph node.” The doc also told me there was some “consolidation therapeutic effect” resulting from these past weeks of immunotherapy infusions with Imfinzi. I asked him what that meant in simple English, and before he could answer, I pre-interrupted him: “Oh, so it helped beat my tumor like chicken soup helps beat a cold?”

In medicalese, if you insist: Imfinzi -- still very much a whole antibody drug used less than two years in the field -- is the current drug of choice for people who meet a fairly strict cancer criteria and treatment, like mine. So, no harm done, and only marginal healing in the works, but still worth the ride, with perhaps even long-term rewards yet unknown.

Today, we began a new treatment regimen. It will consist of an infusion course every three weeks for three months (sounds like high-end sweet dessert dining: “And for the infusion course, we have a chocolate chemo-ganache tart, or an immuno-orange cake.”). 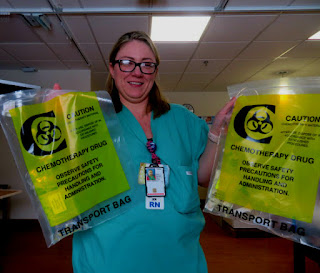 Today, intravenously, in one sitting, I received seven drugs in five classes: an anti-itcher, two anti-emetics, an anti-inflammatory, two chemos and one immuno.

You demand to know names? I know there are word puzzle people out there reading between those hands, so let’s save time.

I’m home now, my bloodstream packed with a hefty intravenous shot of:

(If I didn’t lose you with that one, my dear reader, you have more curiosity grit than your host).

Before I left my Chemo Crashpad, a new patient entered with his caregiver. She was carrying sugar cookies made by Cakes By Amanda in Barre, Massachusetts, for the staff and patients. I promised her friend a pastry plug. 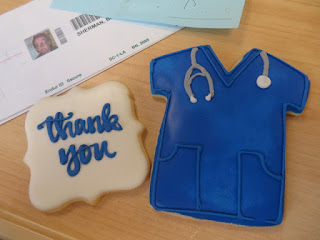 Not only were they clever, funny and Caduceus-friendly, they were sweet eats. 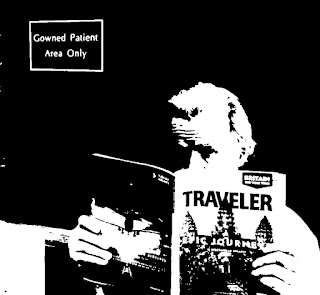 I’m back from brain irradiation.

It was close to a replay of the rad treatments I had to my chest/lung tumor. Two of the original Radionettes were there  (See Day Three), and two had moved on to other afterglow pursuits. I was again offered a choice of music to be played during the session, but this time I opted out.

I thought of requesting “If I Only Had A Brain,” but I didn’t want to add sublime to the sublime.

No, for some reason, this time I wanted the pure deal: unfettered, no distractions, no place to file my fear, no easy-out refocuses. Nothing but me and the slow-revolving click-humming appendages of the linear accelerator.

Nothing but me being escorted around the maze-gate hallway corners into the chamber (feeling like a dead man balking), then up on the table, the Radionettes milling around me, gatching my knees, clamping my head down, the bright targeting pinpoint lighting, the multi-leaf collimator and the slow-rolling arms of the isocentric gantry as I underwent the fractionated stereotactic radiotherapy to my right cerebellum. 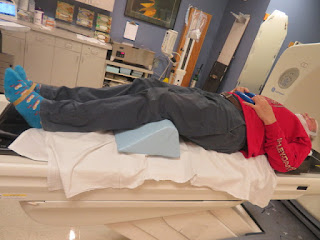 Now, here I am. Next day. At breakfast with Diane:

Diane: I have rhyming names for your brain tumor: either Cerebellar Fella, or Cerebellar Stella, if it's a girl.
Me: Uh ... but, how will I know if it's male or female?
Diane: Same way you know if I'm male or female.
Me: Bacon with your eggs this morning?
Diane: Exactly. 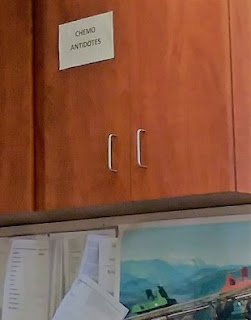 In two months, we’ll have another MRI look and see if Fella or Stella died for my country. Meanwhile, we’ll be starting another round of immuno- AND chemotherapy, with concurrent infusions every three weeks times four of Keytruda, Carboplatin and Pemetrexed.

It must be obvious to you that I’ve been blessed with a brilliant metaphor for a cancer baseball season with my personal shortstop Tinker Keytruda flipping it to second base Evers Carboplatin throwing a strike over to first base Chance Pemetrexed on defense.

Looks like I’ll have to play offense a while longer.

Tomorrow, we irradiate my brain.

This week we made the head mold that will hold my head immobile. It was a lot like having a hot hockey mask stretched over my face, then being strapped into a broken kiddie ride at the carnival. It was very much like that. It was exactly like that, and I also now know what a beard depilation is. 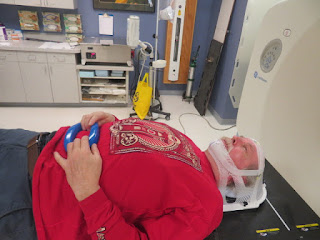 Sorry, but I imagine this treatment as fare on the a la carte menu at an eatery from a future century:

“Yes, waiter, I’ll have the irradiated breakfast brain special, please. Over easy, no toast, and a side of potato skins, not too crispy.”

This will be a one-shot radiation procedure. After that, we let my cerebellum simmer and return to a systemic attack on the leftovers in my chest with concurrent chemo- and immunotherapy courses.

No, I don’t know why I’m making all this one big food metaphor.

It may have something to do with how I sometimes sup at the Michelin three-star restaurant on the avenue of what I think, and other times pig-out at Big Skinny’s greasy spoon diner down the back alley of what I feel. 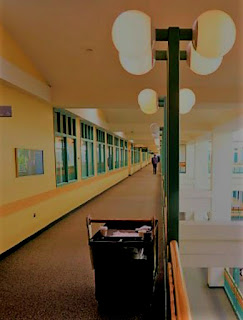 Or, it could be because having both an enlarged cancerous lymph node in my lung and now a pop-up tumor in my head is like … like … walking an endless mezzanine toward an unattended, locked and understocked food cart.

Meanwhile, as I meet with my neurosurgical oncologist or my radiation oncologist or my Harley dealer (just checking to see if you’re still with me), it’s clear that I am in the best hands in the business.

The Docs may all look like Doogie Howser, but they talk Einsteinian, way beyond my practicing ken. Still, I have years of field nursing experience, much of it in hospice and eldercare, and I’m able to dumb-up enough to understand what’s happening to me.

And --- maybe what’s more important in living with cancer --- what isn’t happening. 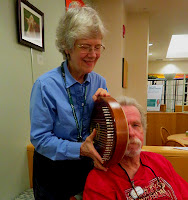 I do have fun in the waiting rooms, and had the pleasure of being served by a wonderful soul who came by with her "harp cart," and applied her art/science “reverie harp” to my skull.

Perfectly-named. She will get full credit for fixing my tumor when the day comes, along with the Rad people. Pentatonic scale, penetrating vibrations, smooth grooves --- Ahhhh!

In the examination rooms, I’m having fun going through the cabinets, playing the placarded anti-superhero, or measuring myself and wondering whereinhell the half-inch in height I’ve had all my adult life has gone. 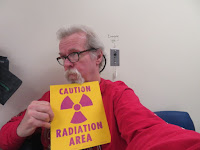 Is it the hospital slippers? An old-man sag in my spine? Am I slouching? Did I have bigger hair before I lost it and it’s come back smaller?

No. Whoever installed the wall measuring stick wasn’t a finish carpenter. Yeah, that’s it. I’m fine and the world is all wrong. 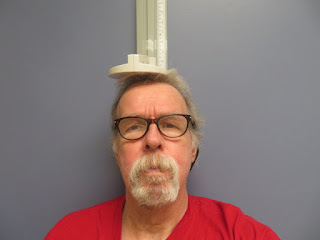 (Tomorrow I’ll flip that sentiment, but right now it’s getting me through today). 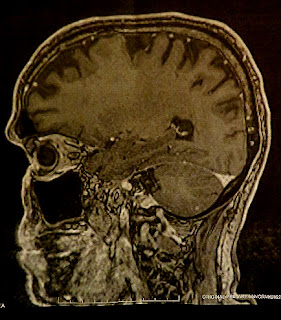 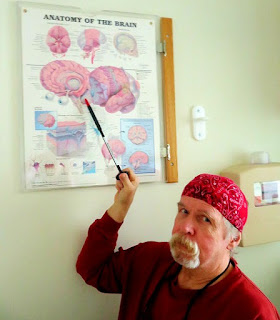