If my life was a soap opera (and whose isn’t?), I’d paraphrase the long-popular “Search For Tomorrow,” and dub mine “Found For Today.” 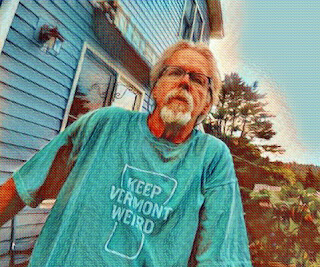 This thought wafted through my mind today without warning, and these days I’ll grab most any muse passing by, reel it in, rub it, scrub it, reshape it, beat it senseless, cuddle it, or just pull an Ars Gratias Artis and keep it raw, standalone and speaking for itself.

(I feel some metaphors coming on, so best steel yourself).

I once attended a nun who was approaching her hundredth birthday. I don’t remember what subject we were smalltalking; it was a bit of the day’s news trivia (probably something religiously political or politically religious, whichever you find most stimulating and/or irritating.)

She went on to explain that any day we learn one new thing that we didn’t know before, we get a bonus day on earth.

I liked that. A lot. And, it may now be one of my new credos. I took the challenge with her, and made sure that every day we visited, I brought some topical tidbit I was fairly sure she wouldn’t know, and brought one along for myself:

“Sister Anna: Did you know that if you had a big enough bottle of catsup and turned it upside down, it would travel almost 2500 miles a year?” 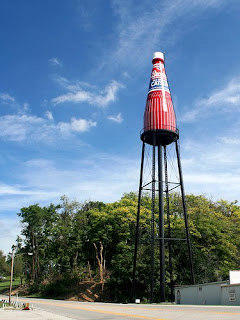 I think the next day I regaled her (and gave her another 24 hours to live) when I told her that the world's largest catsup bottle was 170.1 feet tall. Before we finished with that, I had at least a week’s worth of daily catsup trivia that kept her alive.

Matter-of-factly, when she told me about her formula for longevity, we made a pact, and I told her that I wouldn’t leave her attendance as long as she was alive, and she couldn’t die as long as I showed up.

So, today back to the zip n’ zap regimen (Rad Chemo). This is the most consuming day of the week, where I’m hit with both. The rest of the day is pretty much a wash.  It’s hard to kayak the Ompompanoosuc or ride the Harley with a running IV, though I think I’d be willing to try it as a compensated university study in fluid motion variables (Are you listening, Dartmouth?) 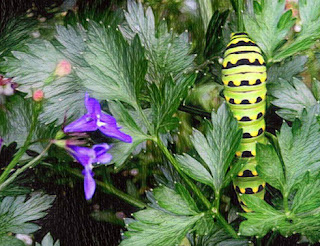 Today, two new pics (and I hope a life-saving fun fact) for you. We’ll leave my cancer somatics lie for now. Everything’s going according to Plan A.

Here’s a pic of a Black Swallowtail caterpillar  that’s taken up munching residence in the porch parsley.  Fun fact: caterpillar butterfly poop is called “frass.”  There.  Now, there's your tomorrow, no extra charge. You’re welcome. I wouldn't frass you!

Uh … if you already knew that, sorry, I can’t save you, but thanks for playing, and do tune in again.