I’ve finished my second immunotherapy infusion of Imfinzi, and now have a clearer idea of what my next every other Monday mornings will look like for eleven more months. 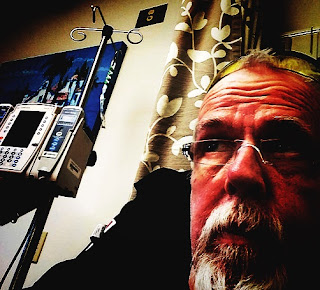 Frankly, it all looks rather boring, unless---

Unless my IV line blows and I get an infiltrate and cellulitis. Or---

One of the many possible Imfinzi side effects moves in, runs amok, and my lungs rile up into inflammation filling stations.

And my breathing goes heaving.

Or my cough won't bugger off.

And my boweling needs troweling.

Or a burning itch starts to twitch.

And my urine ain't recurring.

Or my appetite won’t bite.

Or unless, on my way to treatment, just as I'm bending down to reach for a wallet I've spotted in the gutter, I’m run over and killed by a black stretch limo carrying the Publisher’s Clearinghouse Sweepstakes grand prize film crew enroute to special-delivering my giant lifetime payoff check.

(I mention the latter on the off chance that there really is something in the cosmos resembling an all-powerful supreme being who either has no sense of humor or a really twisted one.)

But, if I survive all that, there's always passing the time in a game of hallway tag with one of the TUGS, the hospital delivery robots, as I take a break from pre-waiting to waiting. 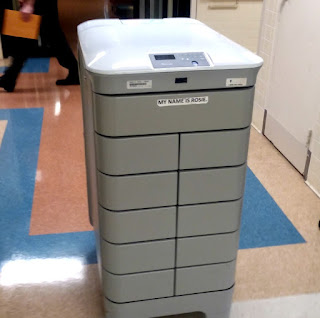 My favorite roaming bot is "Rosie." Not very talkative, but devoted and unfailing in her duty. She helps me (on those days I need it) to let go of my dangerous imagination and to stop thinking.

If I stand in her path, she will wait for me to move.

She will not run over me.

She will only enter an empty elevator.

She will deliver anything, anywhere, anytime.

If she isn't invincible, short of being unplugged, I can't see how.

She never makes a mistake.

She helps me forget what brought me here in the last place.

She looks like a gussied up trash can but inside her fine-lined delivering womb are life-altering documents, and even life-saving medications (mine).

She is pure function. She is unrepentant. She has a lovely whir. She has one green eye and one red eye.

She is never early, on time, or late.

I envy her. On treatment days, I'd like to be her male counterpart: 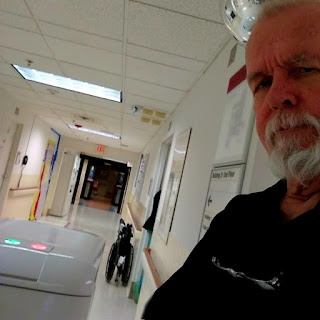