This all has to end somewhere, and because we know where all endings end, I’ll begin to end this one with another beginning.

Much has happened in these last two week’s worth of todays: 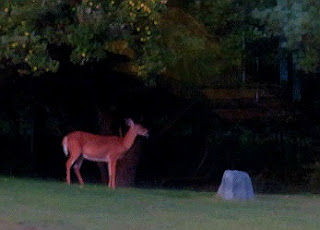 If we add some forehead-slapping intrigue to insult, my blood tests confirmed Lyme Disease. When I came home from the hospital with the news, there was a deer standing by the fake rock under the backyard crab apple tree, and I had a mad flash image that Bambi had it in for me personally.

I had LD a few years ago. After I’d found the embedded tick, the telltale classic bulls-eye bruise followed and there was only a minimal fallout of symptoms. A quick regimen of antibiotics, and it was gone and gone.

This time around, I never found a tick, but a red blotch appeared on my mid-back, and when more advanced waylays moved in (see Day Seventy-Two), everything went on hold until I was restored to all my normal subnormals.

Two weeks and a course of Doxycyline later, I’m fairly clear of them, and today we restarted chemo. 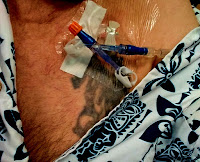 It was administered via my new central IV port, also installed since our last outing. For the record, it lies under the skin and just ABOVE the wings of my Pegasus (Day Seventy-One).

To calm any storm in a port, I was heavily sedated, the port was implanted perfectly, and my IV blood draws, infusions and contrast mediums are now one simple cinch of a pinch.

One stick. No bruises. No misses. No errors.

Today we began Docetaxel (why does that make me feel like a self-experimenting mad Incan scientist?)

The most common side effects are what happens when you put all the vowels and consonants in the English language together in a dozen random orders: 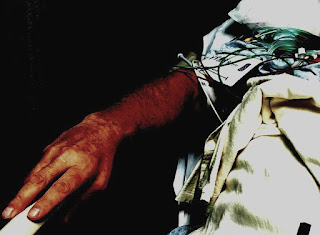 (See what I did there? Trouble is, at this point in my cancer road and sky trip, the signs & symptoms are becoming more mix n’ match.)

My favorite? At the top of the list, says the Doc, it’s likely that I’ll go skinhead again.

The first time this happened, my hair came back wavy and dirty grey. This time, I may opt to keep it bald. At least I might outsmart Bambi from the top up and the back down.