I can’t remember where I first heard it, (maybe I said it, but I don’t think I’m that witty), but it stuck with me:

“I’m not hungry. All I wanted was a cup of coffee and a fork.” 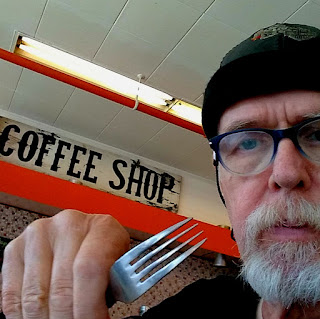 So, when I saw an opportunity to report one of my favorite jokes visually, I tried. There’s something about that sentiment that suits me right down to my hospital slipper-socks. Yes, it’s just plain funny, but it’s also how I’ve tried to move through cancer:

The right map? The wrong directions.

Woosh! We could keep going and wring that metaphor dry, which any nurse-humorist is wont to do, but you’ve suffered enough with it.

Instead, I could write about how my body-healing is progressing (my brain remains to be seen), but these two pics will do it better. If I was in my nursing element charting on myself, I’d be recording the: 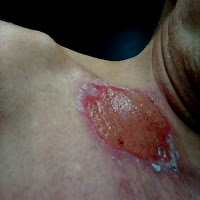 --- size of granulating surface area and the beefy wound bed

--- length, breadth and depth of wound

--- type and amount of drainage 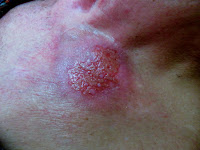 --- signs and/or symptoms of infection

(okay, okay …  just checking to see if I’ve lost anyone).

As a patient, however, when I look at these comparative photos, I don’t see centimeters and exudate, Wong-Baker faces or proliferative phases, but rather a hot-diggety damn, a yahoo, an ain’t-that-a-pisser, and a guarded but firm woohoo! with a yippee! in reserve. 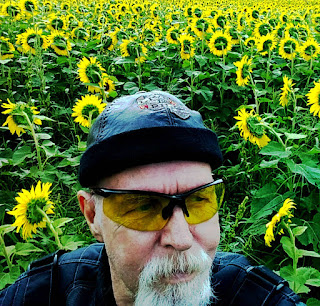 Now, I’ve saved the last for the best, a photo to represent hope and healing and (dare I say it) even the possibility of one day returning to life as a life, not an experiment. A field of bountiful sunflowers bright and full, but facing away from me into the sun.
That will do just fine as my new theme music, for now.