My wife the scientist (plant biologist and biochemist) has more than one save-my-day to her credit. No, I’m not just talking my cancer, though it has been the high end of her rescues lately. 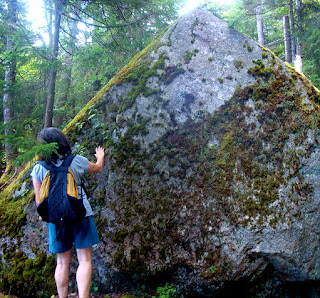 "Oh, quit quibbling!" you might say, and you’d be half-right. The best half.

Example: At last diagnostic outing, my follow-up CT scan did show a decrease in tumor size after a six-week course of radiation and chemo treatments. I wrote down the new dimensions, which to me didn’t seem all that significant, and frankly I expected more of a drastic visual – something I could really get my eyes around. I was disappointed.

“Well, Elwin, your tumor has gone from the size of an amputated dragon’s foot claw to a shriveled raisin.” That’s what I wanted to hear, not just the mere metric reassignments of an irregular-shaped mass.

Enter my uxorial (re)calculator, who promptly scientificated everything, converting stuffy centimeters into the puffy cloud patterns she knew I could relate to: 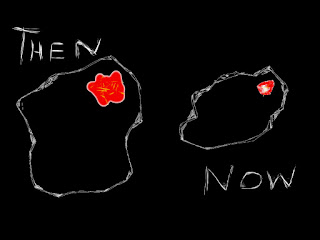 “Look,” she said, drawing a picture of my said diminished puffy tumor clouds on paper, drastically showing my before and after. She did this using Pi (nothing’s scientific without using Pi), metabolic pathways, gene sequences and the table of Elements.

She knows I’m kidding you (and her).  I’m a warrior poet/writer; she’s the diplomatic research/visionary. Sure, she may have used her foundation of super-fundamental figuring to get there, but in the end, there it was on paper: my claw and raisin.

My “Then” dragon’s foot claw, and my “Now” shriveled raisin.

Diane was elated, because she could show me a visual, using her number mechanics and my need for eye candy. “See how much progress you’ve made?”

Yes, now that I see the lines, the shapes: then big, now smaller. I have my comparative analysis with the easy visual specs that my brain loves. I see what I’ve gained (by losing). I see more reason to hope.

Immunotherapy today, my first round with Imfinzi. Only 51 every-other-weeks to go. Imfinzi: 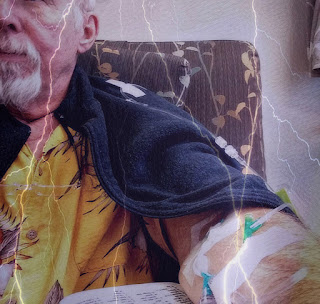 It is “approved for patients with Stage III non-small cell lung cancer whose tumor cannot be removed by surgery (unresectable), and whose disease has not progressed following chemo and radiation therapy.”

That’s me all over.