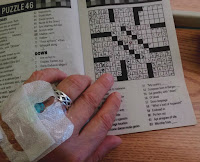 Back into the cooked meat grinder today with both chemo and radiation, starting the day with a five on the ten pain scale. Funny, I used to get out of bed every day with a name. Now it’s a number.

Some minor snafus; let’s just call them my dose of logistical falling pianos: not really preventable or even foreseeable; I just happened to there when they dropped. For example:

--- when the cabinet containing the chemo drugs wouldn’t unlock due to a malfunctioning code reader,
--- when the chemo treatment was delayed due to an unexpected high volume use and depletion of protective gowns,
--- when the computers stopped talking to each other long enough to delay blood draws for me and my fellow infus-ees.
--- and, worst of all, when there was no milk in the unit fridge for my Rice Krispies. Egads! I was stuck for a while there in snap, crackle, stop mode. 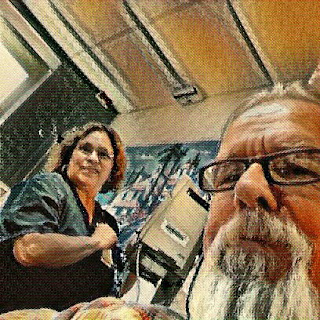 But, I was also a difficult venipuncture “stick” today, partly due to my history of being a good nurse but a bad patient.” This prompted what I’ll call “The Big Wet One” speech from my very good chemo nurse, whom I’ll dub “Florence Fightingale.” Thirty-seven years’ experience, and when push came to insertion, that experience got it done. She helped me despite me and with no help from me.

“You’ve got to drink more; you know that.” This was the second time she’d given me the Big Wet One hydration speech while leveling what my mother used to call “The Hairy Eyeball.” I had it coming.

The result for not adequately hydrating prior to the procedure was my considerable site discomfort and her frustration (my fault, and I won’t put her through that again.)  Next time, I’ll chug a couple of Big Gulps before arriving. But, yes, before my nursing readers begin throwing bedpans at me, I’ll moderate my liquid overcompensation. We don’t need no steenkin’ hyponatremia as an added attraction.

As an irrelevant but fun aside, we all remember the lab phlebotomists telling us pre-needle: “Okay, now you’ll feel a little prick.” The jokes have all been written on that one, but suffice to say that now, when you get a blood draw, you’ll hear that you're going to "feel a little stick.”

I loathe this new and worsening sanitation of the language, thanks to the bullying mandate of political correctness. I’ll get off that soapbox by saying I worry a lot less about being held offensive these days (for reasons I know you now appreciate).  I’ve always tried to write one-size-fits-all humor (wit is better, but often more elusive), but if I don’t, and someone comes up offended, fuck it, and thank you for your kind attention up to here.

Later, I went to the next facility for my radiation, and after another techno-pop glitch that delayed my zapfest for an hour, I entered the chamber, slid into my mold and the Radionettes continued their ace musical background targeting. Up came Boston’s “More Than A Feeling.” Perfection, again:

I looked out this morning and the sun was gone
Turned on some music to start my day
I lost myself in a familiar song
I closed my eyes and I slipped away.

Making some big smalltalk, I asked what had happened to foul up my personal anti-Iron Maiden, and a repairing techie told me: “Well, first the reverse confluxulator short-circuited due to a super-electromotive induction, causing a long-circuited termination reduction of the multiplexing loop comparators.” 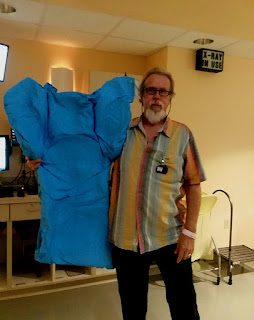 That’s what he said. Trouble is, it came out sounding like: “The thingamabog sucked out the whozamadingy.” After the treatment, I just had to pose with my body cast. After every treatment, they hang it in back on a rack like an old pair of beaten up wings. I like that.

One last sticky note from today: Ms. Fightingale, after struggling with my self-flattened blood vessels, did dump IV fluids into me. Before day’s end, I was peeing oodles of colorless urine.

What a pisser, but I’m feeling a little less like a little stick tonight.