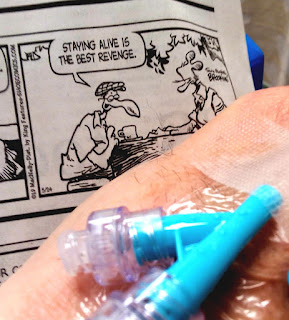 You’ve adjusted to my timeline by now, realizing some time ago how we will compress or expand the timeclock and calendar in this cancer chronologue. Sometimes, we even move laterally; let’s just call that “pacing ourselves.”

I’ve learned, and am still learning in this life, that rigidity and attempting to always make everything a proper, snug and sequential fit will lead to constant disappointment, frustration, and ultimate madness.

Eventually, if we hold on too long to unyielding willfulness, if we leave no room to flex and embrace success AND failure, we’ll live to find ourselves stuffing sugar packets into bras and wearing two left laceless sneakers (taken from the miles I’ve spent pushing med carts down nursing home hallways.)

If you go along here suspecting that today was more than a yesterday or two late and/or out of synch? Let go of it. I have. The facts re-form to fit without compromising the tale.

Since our last outing on Day Sixty-Six, this has been such a sidewise pacing. 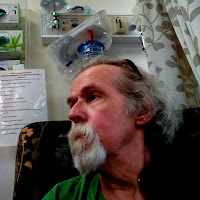 Due to a change in my bowel functions (an immunodrug side-effect) that has been particularly nagging and disruptive, the Doc has held further chemotherapy treatments, though I’ve kept my infusion appointments to check labs, vitals, receive some supplemental IV hydrations and another dose of Remicade, a TNF (tumor necrosis factor) blocker which is used to treat everything from psoriasis to colitis. 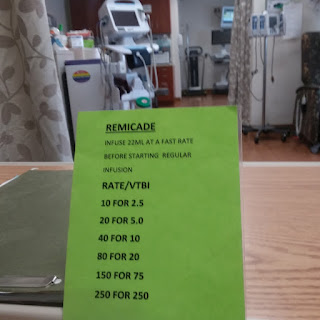 In my case, it was nearly miraculous in bringing me back from the brink (Day Sixty-Four), and it’s not unusual to need follow-up treatments with same.

I’ve responded slowly, however, and today, we’re still not quite there. If you’d prefer TMI metaphorical over medicinal, let’s just say that my bowels are still acting like a cat not quite through licking the bowl.

But, the Doc is pleased with my labs, and I left the infusion unit today with tweaks to my steroid and antibiotic doses. There’s a delicate balance with the dynamics of immunosuppression and infection risks, so Doc moves with targeted caution.

We plan to resume my chemo regimen for the lung tumor next week. On my way out, I was served a plate of sugary blueberry cake, compliments of a fellow infusee “graduating” from his treatment today.

That cake may lead to harder stuff, but I risked it.

The latest MRI brain scan result showed no change there, and both my oncologists chimed “we’ll take that any day,” but my lung tumor had shown some small degree of shift/growth. 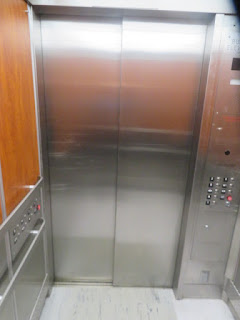 That made me feel like the trip down inside the elevator, watching the door: the light-muted surface showed only my blurred reflection, hardly recognizable, but it opened enough to deliver me for the next time in the right place.