It was a dark and stormy night, when too many breakdowns moved in, enough to warrant a trip to the hospital: nausea, vomiting, fever, edema, pain and oppressive fatigue. 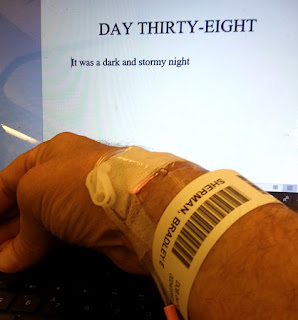 Even the baseball Gods were co-conspirators, starting the BoSox game at the same time I was on my knees with my hurling head hovering over the great white porcelain fixture.

So, off we went, with Diane scooping up the essentials for what would surely be an overnight stay at the hospital for both of us: change of underwear (remember what your mothers said), the usual toiletries, some hard candies, phones, tucking-out the cats, and operating on the assumption that I would be admitted, and she would finish several NY Times crossword puzzles.

Yes, my Rad Chemo treatments had both ended two days before, but I’d been advised by everyone that their side effects would go on for some time, perhaps weeks, and that they would get worse before getting better.

Okay, I’m ready. I’d thought. I was thinking that, when worse came through the door.

The nausea/vomiting was toilet bowl huggingly bad; I was feverish, the mysterious new edema in one leg, foot and ankle was bad enough to cause a limp, I could barely swallow, and the little bit of attempted supper with real food (non-liquid) had been negated when it found its way back to the atmosphere. I was malnourished, dehydrated and sick as a cat.

Blogger’s license: I’ve always thought that ‘sick as a cat’ conjured up an unmistakable image of hacking and target vomiting, but ‘sick as a dog’ could mean anything from fleas to mange.

No. Yes. I was cat-sick, and off we went to the Emergency Room. To make a long story palatable, several hours later I was admitted, Diane had finished her puzzles and unfolded herself from the world’s most cringe-worthy chair. 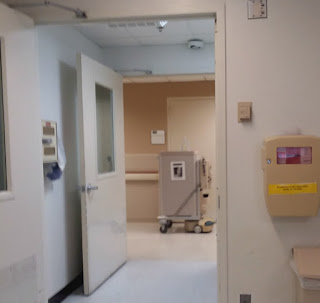 Right now, it’s the end of the next  day, and Tug the Robot Messenger beeps his approaching" Crossing Hallway" warning as he passes by outside my room. This is as it should be, and it looks like I’ll be holed up here for a while as we all once again find our way through the maze of medicine in that way medicine has, of not so much determining what it is, but what it isn’t.

As of this swallow, we’re working on finding what isn’t causing my edema, what didn’t spike my temperature, and who isn't the better puzzler in this family, me or Diane. 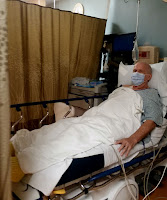 I’m thinking that lately I’ve become the source of more empty letterboxes than her, but with me also providing the clues, her filling in the verticals and all these clinicians tackling the horizontals, we should get the puzzle done.