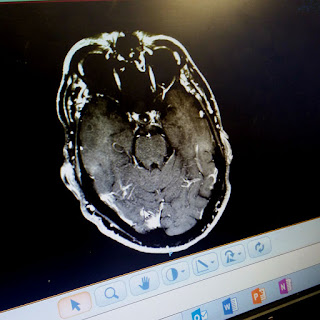 Speaking of humor, my Docs ordered the MRI after finding those cancerous cells (See Day 055) active in my world-premiering lung lymph node --- cells that weren’t there three months prior.

I’d been through the MRI tube o’ terror before, so I was ready going in: pre-medicated with a hefty dose of benzodiazepines, comfy sweatplay pants, a pair of xxx-large hospital Pillow Paws booties and a johnnie gown Baby Huey could swim in. 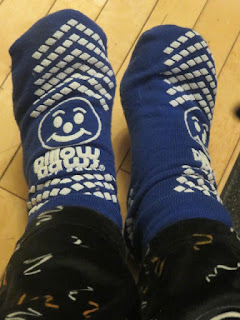 The MRI tech/nurses were built for comfort and speed but also slow-going when needed, and with me today, I appreciated the crawling pace they used helping me to get my mind right for that crawling space they knew I dreaded.

If you’ve had one of these tests, you know the drill and you can skip along until the text starts to feel new again.

If you haven’t … well … hmmm … how to best describe getting an MRI of the brain in one incomplete sentence?

Supine on a hard table, head in a mold, arms pillow-propped and positioned, legs/knees blanket-gatched, heated blankets applied, earplugs and headphones placed (one for songs, one for silencing) IV for contrast medium inserted, and all fine until the Hannibal the Cannibal hockey mask is clamped down over your face.

But, luckily, because I’d already experienced the hostile arms of the horizontal Iron Maiden once before, I’d insisted on getting my mind right ahead of the procedure (per Dr.’s Rx, of course). I’d wanted and demanded to be stupefied with tranquilizers. If they’d slipped me inside that raucous, vibrating squeegee sleeve chamber without my pharmaceutical friendly fire, I would’ve freaked out.

Another fast forward (I’m assuming this is a recreational read for you, so I’m trying to keep it moving): Forty minutes later, after a couple of ins and outs for logistical tweaks, and several slam-banging mechanical interval audioblasts, tolerable (doped or not) only because they were somewhat muffled by the headphones, I was sucked out of the big plastic donut hole of death intact. 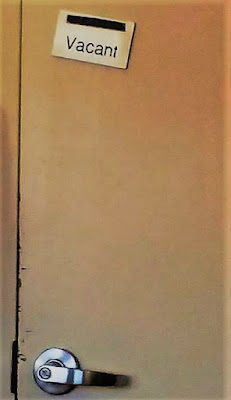 Later, in his office for the preliminary review of the results, my oncologist, to his great credit, managed to not suppress a laugh when I told him my best doctor joke.

I told him right after he told me that yes, he’d just consulted with the radiologist, and yes … I did indeed now have cancer in my brain.

So, I caught him flat-footed and responded by asking him before he knew how not to react, if he’d ever heard the one about the difference between doctors & lawyers?

“No?” He said, unsure of where it was going, and with me knowing that he’d never heard that old chestnut.

“Lawyers rob you,” I said, “but doctors rob you and kill you, too.”

He laughed frowning, then laughed grinning. My mission accomplished. It’s my goal to be an exemplary patient.

So, today, anti-heroes that we are, we went looking for any renegade cancer cells which may have scaled those cellular walls, broken out of the host prison on their own, and headed out on the lam for who knows where.

Trouble is, we found ‘em, right where we’d hoped we wouldn’t: in one of my head’s hideouts. Yes, we’d hoped to find nothing in my head, but hope springs. Best leave the rest of it there.

Now, I’d sure like to know who provided the getaway car.

When we thought the cancer was only in my chest, the course to healing was clear. Now that we’re faced with outliers, all the treatment options must be revisited.

Surgery, radiation and chemo now will be shuffled into spaghetti strand degrees of optimums, maximums and minimums, tossed against the wall, and we’ll see which stick.

Of course, there’ll be a bit more applied science than that, but I can’t resist a juicy metaphor.

Then, as we’ve gone thus far, there’ll be more as we go, El