No kidding, there I was, coming back around to consciousness from general anesthesia after today’s post-op EBUS (Endobronchial Ultrasound) biopsy. I am a sucker for images like this. Raw as it gets, there’s no hiding in manipulation, and one picture is worth a thousand pictures. 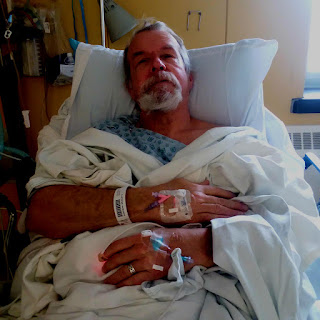 The thing itself was “uneventful,” as we’re fond of saying in nursing. That means that the operating room wasn’t rocked by an earthquake as the flexible tube went down my windpipe, I didn’t roll off the table, and the procedure was successful, securing the biopsy needed to determine the nature and nasty factor of an outlaw lymph node.

Pre-operatively, there were nurses and doctors and techies reviewing my history and prepping me for the morning’s events: inserting IV’s, electrode stickies stuck, assuring themselves that they knew that I knew what they were about to do, getting me down to underwear/flapping johnny and those one-size-fits-all ribbed slippers, on with my nursing bouffant cap, dentures out, jewelry off.

Diane sat next to me, and as usual, filled in the blanks where my mind drew them. There were many, as I was having trouble processing it all. (The brain has a wonderful capacity for performing a magician’s sleight-of-head under stress.)

The oncologist explained everything expertly, using a great metaphor/analogy of a tree and how its encircling bark mimicked the big doings in my chest interior. He did this while again showing us the offending lymph node on the computer screen, scrolling through the scan slices for a compelling trip around my heart’s descending aortic arch, and a bunch of other cool et ceteras.

The anesthesiologist, when she wasn’t distracting me with the facts of what would happen under her applications, talked about her winter power walking adventures with a like-minded Diane.

I felt quite pampered and reassured by it all.

Then, off we went through the maze of hallways to the operating room (everything’s a maze when you’re being wheeled around on your back).

Fast-forward: someone hovering behind me said “Here we go,” and the next thing I remember is where I am in that picture up there, emerging into a muddle head.

The nurse later told me that when I was returning to wakefulness, I kept asking “Where’s Baby Doll?” and everyone in post-op was hoping that I meant Diane. Ba-da-bing.

Another post-op nurse, in sworn secrecy, also said that the first thing I slurred/blurted in my anesthetized fog was “I told you God was a woman!” I vaguely remember a chorus of laughing female voices, but I could be wrong.

It’s why I became a nurse decades ago, just to embrace humor like that.

As for the the results? Well … preliminarily, not the best.

“Abnormal” cells found, and after my “tumor board” meets in the next couple days and fully evaluates the results, we’ll discuss options: revisiting chemo, radiation, possibly surgery. 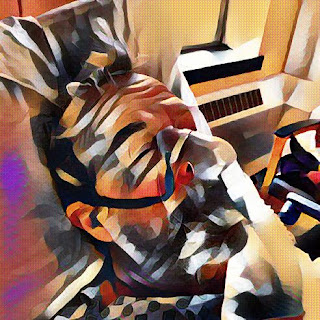 I know what you’re thinking: should I buy season tickets to Fenway?