Before chemo infusion today came the three-month follow-up look-see at my upper innards. 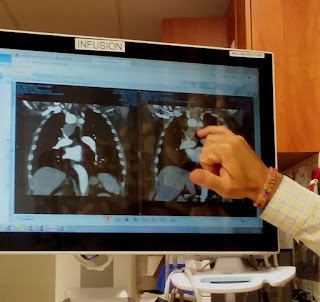 Whenever my oncology Doc wheels out these before and after tumor comparison studies, I feel like an anti-advertisement for quack medicine wrinkle cream:

Yes, folks, there it is:

Before treatment? This big.

But, as we found in the pre-findings on Day Seventy, there are no NEW spots in there, so we’re at least keeping it localized for now. Doc points at the screen to the trained-eye visible nuance of change in the tumor; I pretend that I see it. Sometimes, progress is when the horizon moves closer as I sit still.

Sometimes … what we see and what we want to see is a quiet tantrum in the background.

The chemo drug side effects are more of a nuisance and more tolerable now, perhaps because they’re less mysterious. I’m a friend with fatigue, a buddy to my bowels & bruises, an ally with my appetite, and mentor to my moods.

The latter have become pesky, as my emotions don’t always listen to my advice. They’ve trusted me up ‘til now, but they’ve become quirky, sometimes raring up when they should rest, and going dark when they should be bright-eyed.

It’s become the main event in my counseling sessions.

Yes, I’m being unfairly sidetracked by chemically-induced interlopers who make up their own rules. My job? Change the playing field. 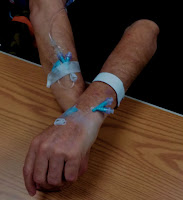 Next up? Looks like more radiation treatments in the offing, and we’re having another MRI look at my brain tumor in two weeks, just to see if it’s remaining a miniature sleeping giant as my lung keeps center stage.

I’m also getting a power injectable IV port because of these repeated failed and/or difficult IV sticks. For the infusions, blood draws and contrast mediums needed, it’s time for a handy one-size-fits-all site, into a vein in my chest below the collarbone, near my one and only tattoo. 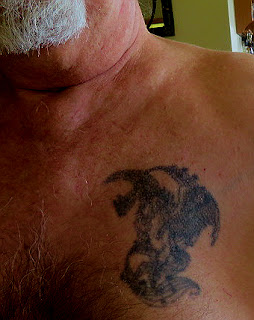 It will be inserted next week, and I’m hoping they can place it in the fading Pegasus.

Just under my wings. 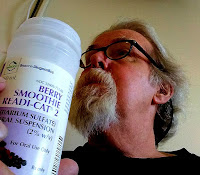 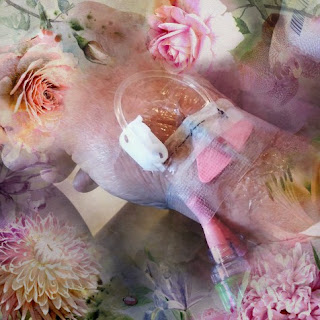 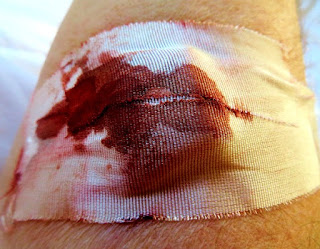 It’s not someone else’s negligence. It’s not the neighbor’s pranking kid. It’s not a falling anvil. It’s not the notion of an act of God (and notions are about as far as I ever get with Godly notions of wispy divine interventions).

No, sometimes, I just screw up. This wasn’t a big boner, but when she saw the bloody dressing from my chemo treatment today, it did bother the bejeebers out of Diane. “You could have exsanguinated! That’s not funny!”

I attempted a classic soothe: “Oooh, I love it when you talk bigly, but you know I’m a good clotter.” (True, lately my blood counts, especially what I call the blue values of my reds & whites have been on the low & high sides, and we should honorably mention my daily home blood thinner belly injections. Any bleed needs a little extra attention).

Then, my bridge-too-far personality took hold, and despite me I had to add: “And, whoosh, honey, it could’ve bled through the new Harley jacket. Oh, the horror! I checked my sleeve, though. All okay!”

And, just as an inkblot whatzit away, when I look at it I see a red puppy chasing an oversized hairy egg. Diane sees a moose backing up. Neither helps this case either way. 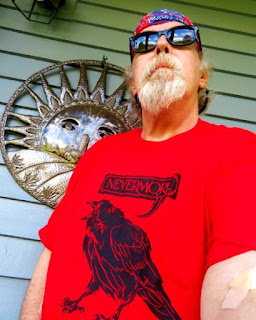 Since my last chemo, I’ve had some outboarding innards with a little too much wake; some tidal fatigue, a few sidebar headaches, but otherwise I and my daily pursuits (and evasions) have been largely unreportable as being driven by anything cancer-ly. I’ve passed the days and nights as part of the minor majority.

Today at chemo infusion, my oncologist instructs and informs:

--Status quo everything else.

--Repeat CT scan of my lung tumor in ten days.

--Up-tweak chemo doses at next treatment

I did press him today about THE issue: where is my Stage IV cancer and where am I in it? He recoiled invisibly. I saw it, because I’ve done decades of nursing care for terminally ill patients and I’m old friends with what isn’t seen or heard at beginnings and endings.

Unfair to him, because Hippocratic magic is always cloudy. Unfair to myself, because my need-to-know brain lately has been pounding the ground of my worried heart.

He’s a good doctor. He answered through the clouds.

I’m a good patient. I listened in the earth.

More as we go,
El